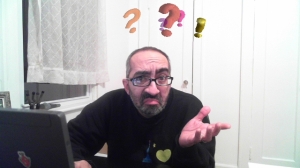 If you’re about to venture on an exciting trip, like I’m currently on, but you’re terrified.   Well, join the club!  But also remember that it’s not you that’s afraid.  It’s the idea that others will know and might try to discourage you.  This sometimes comes as a playful dig to you by someone that loves you but it still creates the same effect.  It’s creates doubt which leads to fear.  Just know that the fear is exterior to you as a spiritual being so that means it’s not part of you.  Someone else created that fear and you accepted it as your own.  It’s created somewhere else.  If you eat some nasty fast food and get a stomach ache then that’s you because you allowed it to enter your body.  You have control to NOT let fear enter your body or your mind in this case.  Here are two simple tools that I follow every single day.

The first thing that I apply is that I’m organized with my daily goals and I keep moving forward no matter what enters my space or like Dory sings in Finding Nemo, Just keep swimming Just keep swimming.  If you’re moving forward at all times then anyone trying to prevent you from succeeding will just have to either move over or they’ll become roadkill and you can look in your rear view mirror and giggle.  Yes, I intended that to be rather cruel and dramatic because it is and you shouldn’t put up with anyone trying to prevent your happiness.  Family members and close friends tend to be the biggest culprits in this area.  Look for it, stay organize and keep moving!

The second thing I apply is stay focus on what your goal for the day is.  You should have at lease one thing that you want to get done every single day towards your goal.  That’s right.  7 days a week 365 days a year.  It’s not impossible to do and once you start you’ll be amazed at how much time you have to spend with your true friends and supportive family.

To summarize.  This is not always easy but necessary if you want to have the kind of life that YOU control.  Your job as a living breathing spiritual being is to find solutions to problems and not make excuses.  You will always have problems but how you confront them will judge how well you do in life.  People who make excuses for a living never reach their potential level of happiness and that is tragic.  A person’s happiness can be measured by how far they can see into the future and then reach for it.  Just standing idle looking at it will not get you there.  So move! 😀  JHS

Some people will never admit that you may be right about something.  It doesn’t matter if you’re advising them on better quality of foods to eat and they are out of shape and getting sick or if you show them proven statistics and success stories on something else.  Some will not get it and will never agree to it.  And that’s it.  But it doesn’t mean you shouldn’t try and that you failed.  They just haven’t reached a high enough awareness level to properly judge a situation and make the best decision for their lives.  They have a block which sometimes is cause, funny enough, by too much education.

Instead of being angry, you might want to have a little empathy for them and just use good road good weather as a way to just keep the peace.  In the meantime, you just continue to flourish and prosper and maybe, just maybe somewhere down the line, they might get a glimpse of what you were trying to share with them.

John Henry Soto a film maker born in New York City, recently moved his family to Bayonne.  His first impression with the small town was so surreal when he first arrived that he decided to create a show based on Bayonne.   The story goes as follows.  John was with his good friend driving a U-Haul truck into Bayonne while his family waited at the new home.  While entering Bayonne he pulled over to make sure he was headed in the right direction when suddenly his phone rings.  He’s looked at his phone and it read, CITY OF BAYONNE.  With a dumbfounded look he glanced over at his friend and said, “Bayonne is calling me!”  His friend quickly said, “Just answer it!!”  John thought maybe Bayonne had some type of GPS system implanted into all residence and he was the latest victim.  This sounded scary so he decided to answer the phone.  To his surprise the voice on the other end was the mayor of Bayonne Mark Smith!  John thought, am I in trouble?  No, he was definitely was not in trouble.  The mayor had graciously called John to welcome him to Bayonne and find out if he needed anything.  Wow!  Again with a dumb & dumber look on his face, John thanked the mayor for the call and explained how he just drove his moving truck into Bayonne when his call came in.  They both shared a laugh and talked about some of the opportunities that are available in Bayonne.  Turns out a few weeks earlier John wrote an email to the mayor’s office to let them know he will be part of the community soon and wanted to offer any assistance.  The mayor read the email and responded.   John can only say, “It was amazing for me to be called by the mayor of a town you’re moving into as you’re moving into it!  All my years living in New York City and moving the around the different boroughs, Bloomberg didn’t call me once!”  He laughs.

This incident propelled John to create a show based on the town of Bayonne.  The show is called Write in Bayonne.  It’s a story of a writer named Bobby who was born and raised in Bayonne.  He’s a writer for the local paper but thinks of himself as the head writer for the NY Times.  He writes about life, love and hope but mostly about some of the characters that live in his community.  This tends to put him in a precarious position in the community and creates some unpredictable situations for Bobby.   The show is a sweet comedy with heart.  Full of characters you’ll love and some characters you’ll love to hate.   The promo for the show will shoot mid December.  It will be a web series to build an audience and create some buzz with the hopes of pitching it to a network.  If any actors are interested in auditioning for an episode you may email John at johnhenrysoto@gmail.com

Title of article:  South Bronx to Sunnyside Page 7  ( I guess I can write a new article titled, Sunnyside to Bayonne!)
http://woodsideherald.com/uploads/WOODSIDE_12_9_11.pdf

Title of article: The Expressive Caboose. Page 2  (About the popular Queens 7 train.)
http://www.woodsideherald.com/uploads/WOODSIDE_11_25_11.pdf